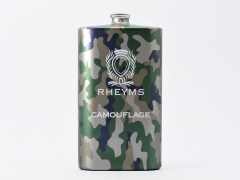 Processing: at the beginning, on the bottle in neutral glass, a white covering UV varnishing is carried out to get, when the decoration is complete, a covering camouflage effect; later, a second specific transparent varnishing able to receive the 3D sublimation is carried out on it, later the 3D sublimation consisting in a soy based sheet where the camouflage decoration with green and yellow spots and the metallic grey effect has been digitally impressed. In the end, pad printing of the text (brand logo and camouflage sign) is carried out.Issue: in this case the problem is not finding the best type of decoration, but achieving, through 3D sublimation, the level of absolute perfection demanded by the customer: a total covering of the glass bottle, which has a curvilinear shape, a four-color printing that has to stand out and at the same time logo and sign that clearly stand out from the background, all with a camouflage effect.

Solution:
Combining the three decoration techniques fixed any single issue.
Technique 1: varnishing, at first white with a covering effect and then of the primer, laid the groundwork for 3D sublimation. P.S. In case the customer had asked a semitransparent decoration, with a see-through effect (sublimatic colors are characterized by transparency), the bottle would have been worked directly with the primer, skipping the white varnishing.

Technique 2: 3D sublimation with camouflage effect. This is the only decoration tecnique that can be used when you want to fully decorate an item, especially when the customer asks the final effect to be as a four-color digital print.

The film, including decoration, thanks to thermoforming, is impressed on all sides of the glass bottle, by means of the heat (they are kept in the oven to 160° for 15 minutes) the film totally adheres to the glass and color molecules migrate within the varnishing done previously.
The technique is called sublimation since the procedure goes from solid state (when the decoration is on paper), to gaseous state (in the oven to 160°) and finally solid again when settles inside the transparent varnishing (sublimatic primer).

P.S. Glass can hold up, without distortion, the necessary temperatures to have a chemical-physical process, also metal and plastic (for instance nylon) can be processed with 3D sublimation tecnique, but temperature is still a very strong limit.

Technique 3: pad printing of the text. Since sublimation is not suitable for logo and sign printing because has remarkable deformations, we have used pad printing for white signs, we could have also used the screen printing tecnique.

Complexity, richness of color in the decoration and a very pleasant result, can be considered an excellent achievement. Versatility of the different techniques that Indeco can manage will allow us complex decorations exceeding the limits of use of one single technique, in this way we will be able to cater to any customer’s need.