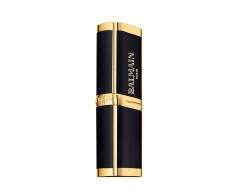 Processing: the famous lipstick is composed of two parts, a cap and the central body both with a square base.
The intense black color is obtained thanks to the double passage of a very covering black pad printing, on all 4 sides, as initially the piece is gold metallized.
On one of the four sides of the hood we made the Balmain logo in negative, highlighting the color gold of the lower layer in contrast with the black of the object.
In order to make everything more shiny at the end, a transparent UV varnishing treatment is carried out, which gives three-dimensionality and homogeneity to the whole packaging.

Problem: first the print on all four sides, the cap and the base have some convex sides and some dug, the tampon leans differently on a convex rather than concave surface.
In addition to this, the graphic to be realized had straight lines: on a non-homogeneous surface, the tampon can deform, not guaranteeing perfectly the yield in print.
The second difficulty was the coverage of black. On the lower layer we had a gold metallization that one did not have to glimpse at all. We have solved through two bars of the same buffer, black and still black to have full, correct and precise coverage.
The final UV painting is the third difficulty. Very precise, nobody dirty or smeared, because the product is premium-quality.

To ensure high productivity we have automated loading and unloading (we are talking about 6 millions of pieces).
Finally, on the varnishing line, we performed the transparent UV varnishing, which gives it three-dimensionality and homogeneity to the whole packaging.

Solution: the endowment of machineries that perform the four processing advances on the four sides, in automatic line, helped us to make a single pass in the machine with 4 pads different, including in this specific case the realization of the double bar / double pass.
Developments: Research on the tampon and its deformations, but above all the use of new inks blacks and special clichés that we have identified as excellent, to obtain this high coverage, there will allow us to solve problems that until today were unthinkable.
We are therefore ready to use these new know-how in the future, to guarantee the customer’s performance
always better.The pictures listed down are those of the case study.