A SPIRIT WITH A SHINY, ROUGH SURFACE 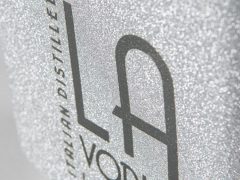 Processing: shiny glittering with a rough effect to the touch

Solution: a special technique was developed, something never designed or tested before, carried out through many steps, investments and failed attempts.

At first, we created one-of-a-kind glitter, in terms of size and color, that reflected light in an incredible way, and get the desired rough effect.

As to the more complicated problem, that is the loss of glitter and its resistance to the touch in the long run, we fixed it spraying a specific kind of varnish on neutral glass, and then applied our special glitter.

That’s it? Of course not!
Glitter would not resist in the medium-long term: that’s why, after the drying process we carried out a brushing up, in different moments, to remove exceeding parts and get a better cleaning.

Later, at the end of this step, we applied a protective varnish, that didn’t cover glitter, but rather could be absorbed; in this way all the glitter remains sticked to the bottle.

On a superficial level, we only have a mere spotless layer of glitter, shiny and rough at the same time, perfectly compact and uniform.

NEW: given the packaging size and the impossibility to carry out a silk-screen printing or to apply hot stamping, we performed laser marking, that gave it a textured, tone on tone effect.

For those who don’t know, laser marking consists in a localized, studied removal of applied finishes, in this case glitter, till reaching the neutral glass.

Another feature of this spirit bottle packaging is uniqueness: every product developed with this technique is apparently similar, but different from each other, given the impossibility to apply glitter in the same identical way.

Development: thanks to this revolutionary technique and to the uniqueness of each bottle, to the point that each bottle is marked with a serial number, the request for these custom-made spirit bottles exploded.

Regarding the developed process and extraordinary result, the world of beverage is stirring and many players want to ride the wave of the moment.