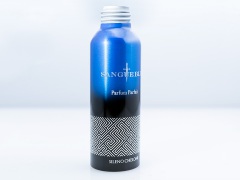 Processing: UV varnishing softening from black to blue on metal surface and hot stamping of logo and a special graphic, with a silver color, reflecting on the low part of the bottle. All of this to give the container much more elegance.

Problem: The request was to paint the aluminum bottle with two colors with a soft effect and to make the most of a hot-stamped graphic with very tiny details, which usually can’t be accomplished with a hot stamping film. Both logo and graphics had to be reflecting in order to contrast with the color of the bottle.

Solution: The request of the two softening colors was solved using the “UV varnishing with soft effect” technique, a technique which has already been used with several other packaging items, but never before on metal.

While hot stamping, rich in very tiny, defined details, was possible only thanks to a study on the frameworks of the silk-screen printing primer and on the hot stamping clichés; the synergy among our technical office, frameworks and clichés allowed indeed to get one-of-a-kind resolution of details and specifics.

Development: Hot stamping is one of the most appreciated techniques in the field of high-end perfumery, the fact of having being able to get so very clear details is a plus value, combined with the fact that in this case the processing was carried out on a metal surface.
The result is even more important if we consider the performance of the reflecting finishing, obtained through silver hot stamping, a finishing that enhances a packaging intended for high-class perfumery.