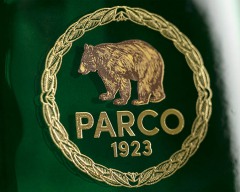 Issue: the customer wanted to have a luxury product, in which the logo reflected all its range. The exigency was to give the packaging an elegant base effect playing on the metalized mirror gold, which is very popular in the niche perfumery. The idea was to reproduce the mark, represented by a bear in a three-dimensional way, underlined the fur and the face of the mammal.

Solution: in order to obtain everything requested, we have used two typologies of techniques in addition to green painting and hot printing of the logo. On these, we applied the pad printing technique, using brown color to better paint the fur and the details of the nose and ears. In this way, we were able to create the requested three-dimensionality with the metallic effect.

Developments: we used more than one technique to obtain the goal of the customer. After many tests, (the hot printing does not have a three-dimensionality because is a metallic film), we were able to give it a real aspect which will allow us the same realization for future projects, even for screen printing. We are one of the fewest societies which can have a hot printing applying a metallic mirror film on a painting, because we have created a method which allows us to decorate painted glasses too.