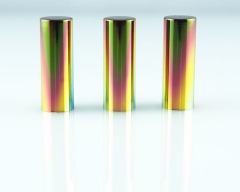 Issue: the customer wanted to obtain a solution of decorum with iridescence.

This particular process allows for a given object a rainbow effect, that is, the possibility to view all the colors of the chromatic scale according to how it is exposed to light.
Although it becomes more popular in the world of perfumery and cosmetics, decoration with iridescence is difficult to reproduce by simply varnishing the object.

Solution: to obtain the iridescent effect we opted for the UV metallization. The printing process involves the use of a set of different metals. After this first phase there is that of the covering the final object with the transparent finish.

Iridescent metallization can be completed with one of our decorations (such as screening or pad printing).

Developments: the iridescent effect can also be used in the beverage industry, on small objects and various materials including plastics: caps, mascara packaging and small manufactured bottles with complex techniques such as glitter varnishing.

UV metallization with iridescent effect is very successful in the mass market to catch the consumer’s eye and be able to sell the product.