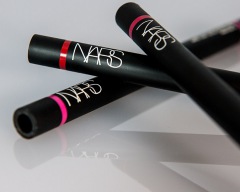 Issue: The customer wanted to apply two colours on a lip pencil using UV screen printing: the white texts and a band of colour corresponding to the lipstick.
The first difficulty was the collection of lip pencils, consisting of about 20 colours very similar to each other. The customer wanted that each colour of the lipstick was reported accurately outside the pencil to make it recognizable to customers that purchased. The difficulty to be overcome was that of having a very marked on the opacity of the black lip pencil.
The second difficulty was related to the texts that were to be printed with a covering white colour; this is a finish very hard to have on a black base.
The last difficulty was both quantitative and qualitative: the printing of lip pencils amounted to about 3 million pieces.

Solution: we took the colour samples provided by the customer and we have shown them on the palm of the hand, noticing the visual effect they would have on their lips. In this way the colours shown on the outside of the lip pencil are more realistic than faithfully reproduced samples.

During the production, we used a new system requiring several steps, without departing from the production line of the UV screen. This allowed to obtain a much more effective covering on piece, with best results aesthetically and the advantage of being able to mask the conjunction which usually is highlighted in the printing of coloured bands.

Given the high number of pieces commissioned by the customer, we choose to print on both sides of a long lip pencil longer twice normal, then we cut it in half and get two pieces. In this way we have halved the production time.

Developments: This new printing system was subsequently used for other customers who had similar needs: obtain stamps using very covering UV screen printing and at the same time with an excellent definition of the texts.

One of the strengths of In.Deco Screenprinting is the dynamism in understanding the needs of its customers, always finding printing solutions to suit their demands. Here are some examples of projects carried out.