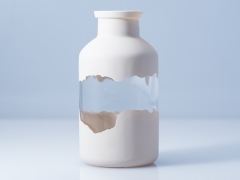 Processing: ultra-matt varnishing with a soft touch effect that to the touch reminds the soft skin of a peach, on parts of the item. The aim of masking is to create a three-dimensional effect, dynamic and highly tactile at the same time, in order to show the contents of the bottle.

Issue: the effect desired by the client, a decoration technique masking, is generally made with very expensive plastic molds, since this kind of masking requires precise edges to avoid that the technique masking, in this case varnishing, has smears or isn’t defined.

Solutions: development of a new masking technique that uses a plastic “film”, directly designed by the producer and us.  We managed to develop a masking digitally cut that, once applied to the product, is able to withstand the production stages (antistatic, flame treatment, final drying, etc.) and once removed grants precision and perfect quality of the decorated edge.

Another important feature of this type of masking is piece centering: at the beginning it was made manually, later we equipped with a machine for masking centering, in order to automate this step and allowing a high precision and an increase in production capacity.

Later we varnished the piece; the result is the masked effect that you see in the images.

To give the product a highly tactile effect we used matt varnishing with a soft touch effect that reminds, to the touch and sight, the peel of a peach, that makes the packaging captivating and satisfying for our senses.

Development: this masking can be used in various forms: we reused it with flocking, but it can be combined with other decoration techniques and also with other materials besides glass, like: plastic, metal and given its versatility, surely on other materials.

The result is defined: a clean line between decoration and glass surface, achievable with low costs, in an automated way.