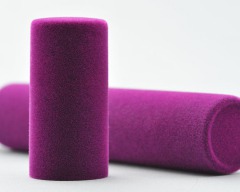 Issue: The customer wanted to create a flocked effect to cover entirely both the cap and the bottle. The requests were specific: to obtain a velvety effect, with a tactile sensation much clearer than traditional flocking used to cover lines and special decorations. The customer also called for a perfect cover of the bottle and cap with a purple flock.

Solution: We had studied an ad hoc solution for this type of full flock. In particular, we used the same glue for traditional flocking but with a different density, in order to be uniformly vaporized on the object. The process of proper flocking has been realized only after this step.

We used longer flocks than those used in the flocking for the decorations, in order to obtain a flocking with an obvious velvety effect to the touch.

Developments: Today the flock together with the glitter, is one of the most demanded techniques both in the cosmetic world and in perfumery.

Developments of the full flocking are both aesthetic and functional. Aesthetic, as the flock allows to obtain decorations for the embellishment of the objects. Functional, because it can also solve some practical aspects. The most typical example is that of the glass with a flocked bottom: in this case the contact with the underlying surface will reduce the risk of scratches on the surface.